Australia has the best environment for preventing illicit trade, according to The Illicit Trade Environment Index released today by The Economist Intelligence Unit. The Index, sponsored by the European Chamber of Commerce, Singapore, looks at 17 Asian economies. Australia scores in the top five in each of the index’s four categories: intellectual property, transparency and trade, customs environment and supply and demand.

Hong Kong, once a hub for trade in counterfeit goods, ranks third in the index, with experts in illicit trade and intellectual property pointing to great improvements in policies and institutions designed to combat illicit trade. It scores highest in the supply and demand category, which measures the degree to which governments have used policy levers such as taxation levels to curb demand, and hence supply, of illicit goods.

The report notes that the flow of illicit trade tends to follow that of licit trade and in this regard Southeast Asia could see an increase in the former as rising labour and other costs in China encourage manufacturers to seek investment sites elsewhere. Many Southeast Asian countries are ill-equipped to combat illicit trade, and as a result rank at the bottom of the Index.

China, where companies are notorious for producing huge volumes of counterfeit goods, finishes ninth in the index based on improvements in IP protection and transparency.

While it has the strongest customs environment, a failure to monitor its busy free trade zones dragged Singapore’s score down to 7th, where it is tied with Taiwan.

Chris Clague, the author of the report, said: “Illicit trade poses a threat to public health, the environment and innovation, and provides funds for transnational crime networks and terrorist organisations. History has shown that illicit trade tends to follow its licit counterpart, so as the region continues to integrate, the threat will only grow unless governments make greater efforts to combat it. The Illicit Trade Environment Index and accompanying report are intended to stimulate and improve discussion of the issue.” 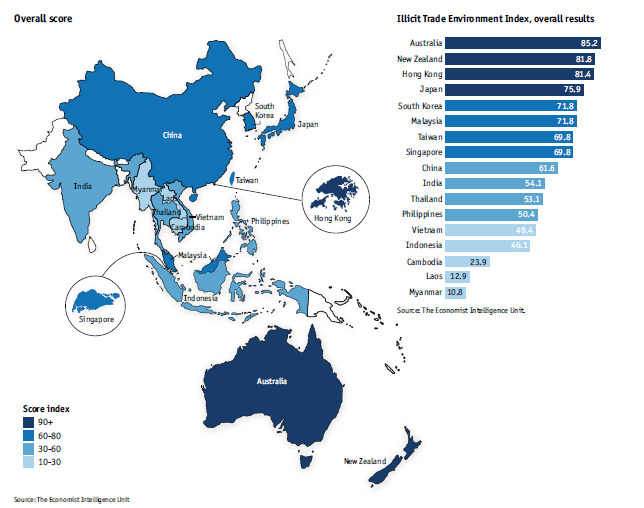 The Illicit Trade Environment Index comprises four categories: intellectual property, customs environment, transparency and trade, and supply and demand. Each category includes between two and five indicators which were selected based on the results of an extensive literature review and input from a panel of external experts.

The countries were selected based on geography, with Brunei excluded for lack of available data.

A full explanation of the index methodology can be found in the appendix of the report.

The report and Excel-based model are available for download at illicittradeindex.eiu.com, which also features an interactive infographic that allows visitors to explore the results.

About The Economist Intelligence Unit

About the European Chamber of Commerce, Singapore

The European Chamber of Commerce in Singapore, known as EuroCham, has the mission to represent the common interests of the European business community in promoting bilateral trade, services and investments between Europe and Singapore and Asia-Pacific.

EuroCham is a non-profit membership fee based organization with a membership composed of the European National Business Groups in Singapore as well direct corporate members.

EuroCham provides its members with an information and exchange forum and a lobbying channel to Singaporean and European political & economic circles. EuroCham is the sole European representative at the Singapore Business Federation (SBF) Council.